Booking in for test ride

Just a quick one today, pending a phone call tomorrow from George White Swindon, I hope to be going for a test ride on an ER-6F this comming Saturday. I really hope that they still have the bike available to ride!
Posted by smartroad No comments:

Well went to George Whites today to have another look at my 3 contenders for a new bike (ER6F, GSX650F and XJ6 Divvy). Okay I was a little bit of a chicken as I took the car, although glad I did as it hammered it down for a while there and back. Given the 100 mile round trip I wasn't unhappy that I didn't get drenched and then had to walk about wet. My comeuppance was that I forgot to take my kit with me and couldn't get out on the bike to test ride. Sitting on each though gave me a chance to reflect on them.

The GSX650F is a very nice bike, looks good and has a whopping great bike exhaust bolted on the side. My problem with it is when my feet are on the ground part of the faring rubs against my leg. Not a deal breaker, after all how long do you spend like that on a bike? But when I lifted my knees into a riding position they rested on part of the tank, which could cause a problem if there was any vibration. The seat was very comfortable and I could imagine being able to sit on it for quite some time. The Divvy again, very

nice although I think it is lighter then the GSX it felt much heavier when bringing it up from its side stand. One thing the Divvy had which neither of the other too seemed to, was a center stand. Although not the most glamorous if biking accessories, it does make working on the bike easier. The seat though felt rock hard when sitting on it, which was weird as poking it with a finger felt really soft. Defiantly one for a test ride. My biggest 'issue' with the Divvy is the front lamp suite. I have no idea what Yamaha were thinking when they put that 'jewel' for a running lamp on top of the main lamp! The red it comes in though is stunning.

Last is my favourite, the ER6F. It feels nice and light and like the other two has a good riding position. My body shape wraps around 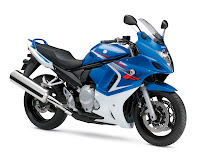 the bike with little or no problems that I noticed and despite the latest edition of Bike saying the ER6F had the most cramped riding position of these three (they also had the Aprilla Shiva but I am not interested in that bike), I actually felt the GSX was more cramped. Again that could simply be because of my body shape. I'll admit I am a little bias with the little Kawasaki, I have long lusted after it, however I am hoping to have a test ride next weekend to see if it rides as well as it looks to me!
Posted by smartroad No comments:

Some time ago I brought the SHS-300 helmet headset by Midland. These are Velcro backed speakers that sit inside your helmet just about where you ears go. Aside from the obvious function of pumping music into your ears while you ride, they also allow you to still your earplugs to block out potentially damaging wind noise. As said the speakers Velcro to the inside of your helmet, and you can run the cable out to the socket under the padding. If you have removable padding then the wire can be routed around to where ever you want the socket. Should you not have removable padding, like me, then you should be able to tuck it into the folds of the foam or carefully pull the padding up to push it behind. The socket that connects to the lead to your MP3 player isn't a standard connector, or rather, isn't your usual 3.5mm jack. Instead it uses a 6 pin "mini-din" plug/socket. I assume this is because it is the same connector used in Midland's full headset/microphones for PMR radios and the like.

The problem has been that since the cable sticks out of the helmet it gets caught by the wind and over time cause the cable to break inside at the plug. If Midland had used a normal 3.5mm jack then there wouldn't have been a problem, as I can go to many stores and get a 3.5mm jack to jack lead for a few quid. As it stands I got my soldering iron out, popped down to Maplin's to get a 3.5mm plug and socket and replaced the mini-din on the headset and lead. One of the other advantages is that the mini-din could only be inserted one way, there are arrows to show you. However if you already had the helmet on and then went to plug it in, you soon found out what a pain it was trying to figure out which way it goes! With my DIY botch job with the jacks I can now insert the plug into the socket without worrying about its orientation.

The sound quality is medium to high. There is enough clarity to be able to hear the music over the road noises and with earplugs in, while still being a good full sound to it. Despite their small size and thinness there is a fair amount of bass and voices come across very well. Of course you don't have to use these just for music, I have used them with my phones SatNav so I can hear the instructions being passed too me, rather then trying to see the screen in broad daylight.

Overall I would definitely recommend these, even with the problems with the cable. If you are happy wielding a soldering iron or know someone who is, I would certainly suggest replacing the mini-din connectors with normal jacks.
Posted by smartroad No comments:

Email ThisBlogThis!Share to TwitterShare to FacebookShare to Pinterest
Labels: General Use, Reviews, Upgrades

As I was planning on a short trip I thought that given the rear tyre had been brought up as an advisory I would get it changed. A few hours later I was removed of £82 and had a new tyre with nice deep treads. Now all I need to do is just ride carefully to get rid of the release compound.
Posted by smartroad No comments:

Email ThisBlogThis!Share to TwitterShare to FacebookShare to Pinterest
Labels: General Use, GS500

It has to be one of the more annoying things that being a motorist in the UK requires, the dreaded MOT.

Firstly my horn is pathetic, rarther then a good firm sound it is more: 'peep peep', so maybe an upgrade will be needed. However it got through the test with only the rearwheel close to the legal limit. Now that is done the brought the road tax and now road legal for the next year. The next expense is insurance not until next month though!
Posted by smartroad No comments:

Although I have never ridden a powerful bike as such, since taking off the restricter for my bike I can say the bike is much better for it. Firstly it is running much better and smoother, but more importantly it is pulling much better. Before sixth gear was only really for cruising at 70mp, if you opened the throttle in that gear you would only accelerate slowly. Now, although still best to drop a gear, it can actually pull the bike into a faster speed from 60mph. Despite only gaining around 13bhp, it feels like a totally different bike, making over taking much safer.
Posted by smartroad No comments:

Well my 2 years are over and now I can ride any bike I want :D

Given that it has taken time to have some nice(r) weather I have been able to get the bike out and remove the restrictor kit from it. Not only does the engine seem to be running better now, but the increase in power (albeit a small increase the GS500 isn't known for its power) from 33bhp to its native 47bhp. Not much but does enable a far better acceleration curve and is able to maintain its speed even with a strong headwind on the motorway.

Now to look at replacing it!
Posted by smartroad No comments: