Bikes are better then cars! Period, even in rubbish weather. This was meant to be a simple one day trip to a relatives 18th party, but turned into a far more enjoyable weekend away.

This seems to be the year for me to do bigger distances on the bike! The trip itself was about 100 miles each way. The forecast for Saturday was to be dry but cold. I was fine until the last half an hour when the snow started to fall (albeit for only about 5 minutes!) and the temperature dropped with it. There was the point where I started to loose feeling in my fingers. I wouldn't have minded but I had my cold stopper liners on as well. Sure I should have a go about the name, because yes they prolonged the time before my digits went cold, they didn't stop it happening. Still I know nothing is perfect and even my 5 layers of clothing started to fail me after being in such wind chill for that time. Its not a nice feeling, that insidious cold sensation when the heat is slowly sucked out of you. Still got to my destination (after visiting some friends first and getting a bite to eat) and had a good time!

Before leaving my friends to go to the party it was offered that if it got too cold and/or icy that it was possibly to crash at their place. Rather then take the 100 mile trip home in possibly bad to dangerous conditions. After leaving there and taking the 15 minute ride for food it was soon decided to take them up on that offer! Another 10 minute ride to the party soon made sure that that was the best thing to do. Party happened and was good fun. The time drew near to leave. As the father of the 18yo was an ex-biker it was suggested that we leave the bikes at their place and he would drop us off at our friends. I should say that the party was held in a village hall and the roads were a little, er, off the beaten track. At about 11.30 the temperature was certainly below zero and again that offer was taken, rather then risk the joys of B-road black ice.

So at this point I should have been on my way home, but instead ended up crashing at a friends house. It actually was really kind and I totally enjoyed hospitality and the conversation. It was a nice thing as well, normally I would only see them once a year at another party, so it was great to be able to chat and catch up. We were graciously given a lift to where our bikes were, where the invite for lunch was extended. Again this was something that wouldn't have happened if the sensible thing had been done and the car had been used. As it had been years since I had seen any of this side of the family it was fun to sit down with them for lunch. Again I have to thank them for all their hospitality! The trip home was actually slightly warmer then the trip there. Clouds and rain tend to have that effect. Two hours or so getting home and the only good part was as I got closer to home the rain slowly let off, until the M3 where it had largely stopped altogether.

At the end of it all, had we gone by car we would have been warmer and home much sooner. However being on the bikes led to a lot of happy circumstances. Staying overnight at friends and having the chance to get to know members of the family I may never have really spoken too that much. Yes the car was the sensible choice, but the bikes turned it into a far more interesting weekend.
Posted by smartroad No comments:

Email ThisBlogThis!Share to TwitterShare to FacebookShare to Pinterest
Labels: Cold, General Use, Trips 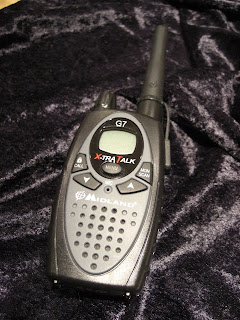 Have finished getting the parts to complete my Autocom unit. Purchased the Midland G7 off of eBay. Most places seem to be selling the radio for about £50 per unit. Going onto eBay, got two units with base station for £48. Bargain! So having got the radios I had to get the lead for the Autocom to connect it. Ordered from BikeBitz in Yatley online. Really quick service, ordered 3pm Monday, received Tuesday morning, very impressed. Opened up the parcel and noted that the lead I ordered for the radio was the wrong one. A quick phone call later and I had organised to pop into their store (was passing that way) and get a replacement. Wednesday afternoon went into the store and got the replacement. Really quick and really professional 10/10 for those guys.
Using the radio requires a change in the way that you speak. As anyone who has used PMR radios before know they are 'half-duplex' or can only receive or transmit. Where as a mobile phone is 'full-duplex' so you can speak at the same time as the caller. There is also a delay in the time between speaking, the transmitter sending and the receiver picking up. Autocom's manual suggests that you have a key-word that you start what you want to say with. So for example if you said "Turn left at the roundabout" the receiver would get "left at the roundabout". The suggestion is to start with "OK", thus you would say "OK... Turn left at the roundabout". With the use of radios there is a certain etiquette and when you finish a sentence to end with "over". Although the G7 radios have a tone they play once transmission has finished.

The range of the G7's is reasonably normal for PMR, however don't expect them to work over longer distances if you are in a concrete canyon. I would say, in a builtup area out of line-of-sight, about 200-300 meters is it.

For thier intended use as communication between riders though it works very well, with the speech through the Autocom being very clear. As long as you don't get too far away when entering a built up area they are great to be able to give instructions; or just chat on those longer trips.
Posted by smartroad No comments:

I was up early and rode to the event. Actually following some other bikers from the A13 as my TomTom went nuts and tried to navigate me in circles. My thanks to those guys! The event itself: it was tiny! I know there is a temptation to compare it to the NEC show and that is a little unfair, however it did feel much smaller then the last time I went, two years ago. Given that ExCeL is a massive place, it looked like there were only two of its halls being used. For the ticket cost I feel that I have been a little hard done by when it is compared to NEC, sorry MCN but value wise the NEC is leaps and bounds over you. Even comparing some of the stands. The George White stand, at the NEC, was like walking into a mini shop. The racking went up high and there was tons for sale. At MCN, the stand felt more like a car-boot sale, lacking what made it impressive at NEC. That, I think, is what made the event feel smaller, the stands seemed less grandiose. Even the manufacturers stands didn't have the same buzz that was at the NEC.

But for those looking for a bargain there did seem to be a few bits on offer, there was a 2-piece leather suit that I notice was half price. Okay, it is last years, still a decent enough saving.

On a more personal note I wasn't able to buy anything that I went for. Seems that either everyone is my small size or companies just don't accommodate for the smaller guy! I never realised the a 40-inch chest is XS, that makes me feel even smaller... Neither were there any helmets that really took my fancy. So for me it was largely a wasted trip. Yet that is being a little harsh. I always enjoy going to these sorts of shows and it was fun to look at everything that is on offer in one place. Even getting the chance to actually sit on the Triumph Daytona, which I couldn't do at the NEC with the number of people around it. And I got a free goodie bag from MCN as one of their subscribers.

Overall I enjoyed my time there, yes it is small and not really as good value as the 'other' big show, but they also had Honda and Harley Davidson. Will I go again? Maybe, if I need to go shopping at this time of year. Is it a 'day outs' worth? No, unfortunately. You can get lost in NEC for hours, going round and round and still finding new things to look at. If you want to make a day of it at ExCeL I would suggest thinking about where you could once you have spent the hour or two there. There is Thurock nearby for the shopaholics or maybe go off into London proper.

In all honesty I think it is almost as fun to wait for places like George White to have its open days. They tend to be when it is warmer and they have their full range available. Not a full days out worth in itself, but at least you can go with mates and just make it a stop on a ride-out, and best of all, it is free to go to.

MCN ExCeL needs to become much larger and maybe moved later in the year as it is just too close to the NEC which, fairly or not, is what it will always be compared too. Moving to somewhere May to June time may decrease the comparison. It would be warmer too.
Posted by smartroad No comments:

Off to MCN tomorrow

Going to go to the MCN show at ExCeL London tomorrow. Hoping to get a few pics and some stuff from there, maybe a new helmet to replace the one damaged in the accident.
Posted by smartroad No comments: