The AA have put up information for riders about the dangers of many "fair weather" riders bringing their bikes out again. Here is the article:

AA breakdown patrols use motorbikes in some major cities

As thousands of people dust off their motorcycles and take to the road for the first time in months, AA Motorcycle Insurance is advising bikers and other road users to beware of the dangers of 'road rust'.

Many bikers are 'rusty' having not ridden their bikes all winter as are many car drivers who have grown used to having fewer bikes around.
AA comment

Simon Douglas, Director of AA Motorcycle Insurance, says: "We have all heard of road rage, but at this time of year the big danger to bikers is 'road rust' among drivers who have lost the habit of looking out for bikes. The skills of many motorcyclists need polishing too after a long lay-up, so it's important for both to be aware of the risks as the results can be tragic.

"Bikes can be repaired or replaced, but bikers cannot."

Most of Britain's 1.6 million motorbikes will be back on the nation's roads over the next few weeks – a period that normally also sees a big upsurge in accidents. Claims involving motorbikes typically soar by up to 40 per cent in spring, according to analysis by AA Insurance in conjunction with BLD Ltd, the motorcycle accident management specialists.

Longer days and mild weather are set to lure thousands back onto their bikes, as will Easter holiday excursions. But especially hazardous in the lead-up to the holidays are busy rush hour traffic and the school run, which account for a disproportionately high number of accidents.

Mike McMillan of BLD explains: "Fewer than 20 per cent of all motorcycle accidents that involve another party are wholly, or partly, the motorcyclist's fault so it is vital that all road users take extra care – especially in heavy traffic."

Another particular hazard this spring is winter's legacy of damaged roads. The AA estimates that icy weather earlier this year caused a 40 per cent increase in road damage, pushing the UK's pothole count up to 1.5 million. Hitting a pothole at speed on a motorcycle can have devastating consequences.
Safety tips for bikers

Safety tips for bikers from the AA's own motorbike-based breakdown patrols and BLD include:

* Make yourself visible – riding with your lights on at all times increases your visibility to others on the roads
* Always wear protective clothing – even for short trips – including a helmet, protective jacket, trousers, boots and gloves
* Slow down as you approach bends – accelerate out, but make sure you keep to the speed limit. Accelerate and brake smoothly and take extra care in the wet
* Constantly monitor your riding and think about your speed, road position and distance from other traffic. Be aware of your environment and potential hazards such as cars pulling out and damaged road surfaces
* Seek feedback from skilled riders, try a BikeSafe assessment or Advanced Rider training course
* Keep your bike maintained – regularly check wheels and tyres, brakes, battery, lights, oil and chain or shaft
* The quality of fuel and oil can deteriorate over time if your bike is not used for lengthy periods – check and replace if necessary before returning to the road

http://www.theaa.com/motoring_advice/news/road-rust-warning-as-spring-heralds-return-of-the-nations-bikers.html
Posted by smartroad No comments:

MCN have reviewed the ER-6F and seem on the whole to like it (although in the paper they only give it 3 stars despite almost singing its praises?!). Here is the video of the bike 'test'. 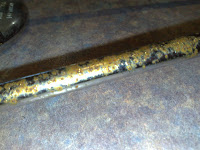 Back in September I had to change the mirrors on the bike as the factory ones had stopped being able to hold its position. So I brought some (very) cheap mirrors from Busters. To be honest they are pants. The picture on the right shows what has happened to the arms, the chrome has died and allowed the metal underneath to rust out. This has left it looking rather, well rubbish. Mind you for only £12 they have done better then I really expected, although I wasn't expecting them to fail like this! 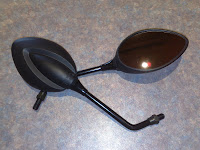 So looking at "intobikes" website I found some new ones by Motrax. A little under £15 each, however I was a little confused as to how to order them. The order from Busters to the old ones was simple, it included both mirrors. However intobikes have it listed as "left or right". As I wasn't sure is this meant that I had to specify a left or right mirror I emailed them. To be honest I wasn't impressed with the reply, it came across as slightly terse. As it turns out the mirrors are literally left or right and by spinning the mirror around on the arm, it can be swapped over.

A few days after ordering they turned up and I installed them very quickly and they look great. Much better then the round mirrors it came with as standard. 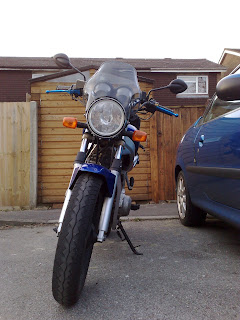