OK I'll admit it, I do like the ER-6F and even more the new 2009 model. The only thing that I do wish is that it would be made in more colours. It seems that most motorbike manufactures are scared of colour. I don't mind the green and blue that the ER-6F seems to be coming in, but what about a sexy black or post box red?

Playing around on the computer I have manipulated the image of the bike to give a feel for the other colours I feel should be made available on the bike. 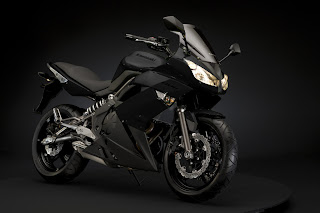 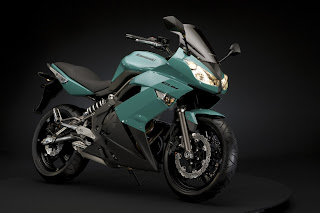 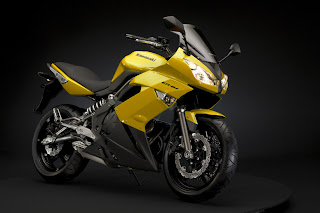 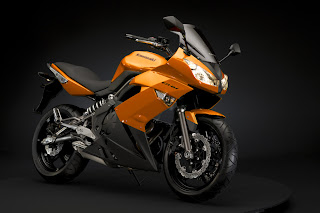 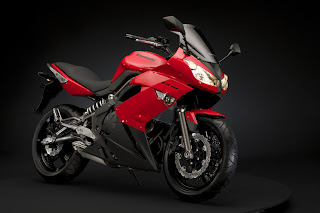 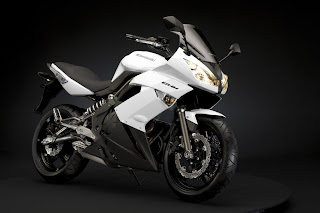 That said it is easy enough to have it resprayed but why should we have to pay the extra money when it wouldn't cost much (anything?) more to supply them out of the box like it.
Posted by smartroad No comments: 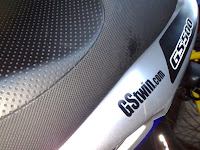 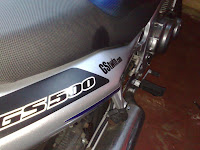 Got a couple more stickers about a week ago from GSTwins.com. I have used the site for loads of information about my bike as it is dedicated to the Suzuki GS500. As I had used the site to help me out, I donated some money to help them, and got a couple of stickers which are now taking pride of place on the rear fairing.
Posted by smartroad No comments:

Since getting into biking and going to the MCN show in ExCeL back at the beginning of the year, I have always loved the ER-6F. It has been at the forefront of the selection of bikes that I am deciding between for when my restricted period on the license runs out next year. My only reservation of it has been the styling. Compared to many of the other bikes out there, it always had a somewhat "passive" styling, not any more! The new 2009 model looks fantastically aggressive. Kawasaki Press Release:

Building on the key values of its highly acclaimed predecessor, the new ER-6f continues to offer a package that is both fun and easy to ride, and matches its sporty street performance with aggressive new Ninja supersport styling.

The balance of compact size and good power offered by the ER-6f's predecessor was the key to its success. To fit into its trim package, an in-line four would have been too wide and a V-Twin too long. The only engine design that offered both good power characteristics and the requisite compactness was a Parallel Twin. While maintaining this balance, the new engine gets a number of tweaks that offer smoother low-mid response and a quicker-revving character.

The key to the ER-6f's compact size is its amazingly compact Parallel Twin engine, which permits the use of a narrow, lightweight frame. The result is a bike with the dimensions of a 400 and the power of a 650 that welcomes beginners with a "Come on, let's go for a ride!" attitude, while also offering plenty of performance for more experienced riders. Changes to the frame, swinging arm and suspension result in reduced vibration and lighter handling, making the new ER-6f more accessible than ever.

Styling inspired by our Ninja supersport models gives the front fairing of the ER-6f the look of a modern supersport machine. Sharp edged lines move forward, giving the bike a more aggressive, crouching appearance. Simple in design, the ER-6f avoids all superfluous design flourishes; lines were made to flow as long as possible. The new, taller fuel tank, minimalist-design bodywork and sharp tail cowl give the bike a compact, purposeful appearance. Attention to the smallest detail contributes to the new bike's high-quality finish and undoubted appeal.

So what is different, well from the pictures the styling is much more in line with the Ninja brand providing a more aggressive and angular style. Gone are the soft rounded corners, in are the sharp lines. Still retained is the under slung exhaust, but now the rear end sports a very tidy set of LEDs for the side/brake light, as very much in vogue at the moment. The dash seems to have had a major uplift, gone are the two analogue dials and in is a LCD pod.

Here is a little montage for use as a desktop wallpaper. 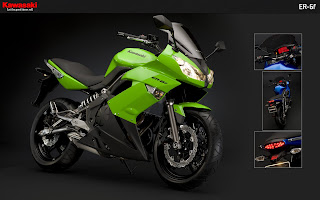 Mods to the bike

OK so they aren't earth shattering changes. I can't see the point of doing that much to the bike as I am not planning on keeping it for too long, but here is the small list of what I have done to the bike: 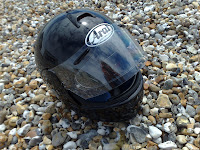 As posted up a while ago I changed my helmet to an Aria Chaser. Here is a picture of it on the beach when I went down to the coast.
Posted by smartroad No comments:

They have now changed the website to the new look for 2008 with a great new "mascot", if that is the right word.

Hopefully there will be more details later, I am interested if Yamaha are bringing along the new 2009 XJ6 Diversion to the show.
Posted by smartroad No comments:

Email ThisBlogThis!Share to TwitterShare to FacebookShare to Pinterest
Labels: Shows 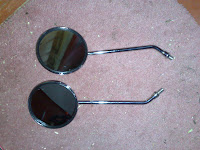 I have always had problems with my right side mirror with it not holding its position. This didn't use to be a major problem, just and inconvenience of having to adjust it regularly. However recently it became harder and harder to get it to keep in place, and now refuses to give me any view other then the floor. Had it been the left side I wouldn't have worried so much, but as it was the right it makes overtaking much harder as I am unable to see what traffic is coming up behind me. So I brought some new ones from Busters. As the bike is merely to get me through my restricted period on my license I didn't want to have to spend a fortune replacing them. Hunting through Busters website turned up a pair for a mere £12. I was worried that they may be really poor quality but decided to give them a go. 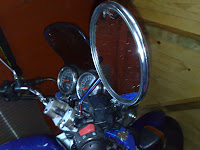 As always with Busters the item was in my hands a short two days later (well with my neighbor two days later, I wasn't in when it was delivered!). Once I had them I got them installed on the bike. Unlike the ones that I have taken off, the new ones have a slight reduction in the reflected image. I guess, should they have been factory fitted, it would have the little sticker saying; "Warning, objects may appear smaller then they actually are!". This seems to be a good thing in reality as it shows less of my shoulder and more of the road around me. Have yet to take them out on a good old road trip but hopefully they will be as good, if not better, then the last pair!
Posted by smartroad No comments:

Brake and Air filter for sale

As I have now changed my functioning brake lever for the new one I have placed it and an air filiter I didn't end up needing on ebay. 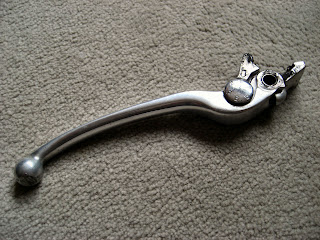 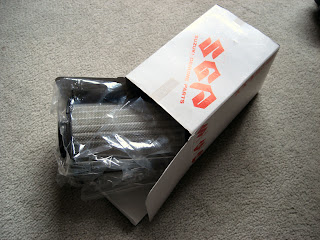 Installed the new brake and clutch levers which were surprisingly easy to do. In all about 20 minutes to change both sides. 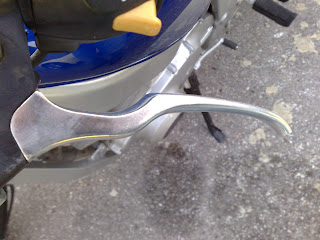 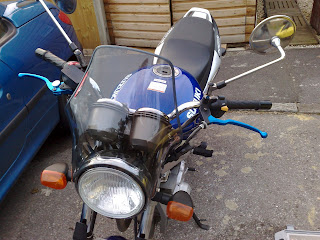 Although the blue of the levers isn't quite to the same as the tank but hopefully they are far enough away to not be that noticeable.
Posted by smartroad No comments:

How much on an idiot do I feel right now? Managed to drop the bike, not while doing a manoeuvre but by parking!! No serious damage done to the bike, the clutch lever has lost its ball on the end and the same side mirror has bent slightly. The mirror is still serviceable but the clutch lever needs replacing.

Brought a new set of levers (both sides) anodised in blue so assuming that they turn up this week, I have a job to do at the weekend.
Posted by smartroad No comments: