This was the first day in months where I haven't used my bike. All due to the snow that fell last night and the freezing temperatures. Combined they turned the road I live at into an ice rink. Annoyingly none of the roads (major or minor) have been gritted so I didn't want to risk riding down to work. Also last year when a similar thing happened, work didn't grit the carpark and it would have been stupidly slippery to get down to where I normally park up.

Hopefully tomorrow is another day and a slightly warmer day, well at least not freezing!
Posted by smartroad No comments:

Email ThisBlogThis!Share to TwitterShare to FacebookShare to Pinterest
Labels: General Use, Parking 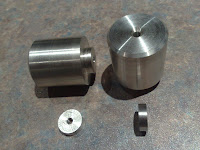 Had the first chance to use my heated grips today and all I can say is that they are excellent! While I'll admit the ends of my fingers were still cold, the rest of my hand stayed nice and toasty and when I stopped the tips soon warmed up.

Due to the fitment of the new grips my old bar ends wouldn't fit as the grips are slightly longer. As such I asked my Father if he could make up some new ones for me with the exact fitting needed. He has and I have a nice set of aluminium ends for the bike. I just need to polish them up and clear coat them (stop the from tarnishing) and I can get them installed. Picture on the right.
Posted by smartroad No comments:

After having had them in my possession for almost a year now, I have finally got my heated handlebar grips installed onto the bike. Not that they are working yet, as Maplin currently have the relay I need on back order, but they have been fitted and the throttle doesn't have any problems.

I toke so long as because they aren't official Suzuki grips they don't have the grooves and flange recesses that the original throttle has. As such a Dremel was needed to remove them. However I didn't want to risk wrecking my original and kept an eye (occasionally) on eBay for a cheap replacement. Finally one came up that I won and I set to work hacking it apart.

Once all the unnecessary bits were removed I installed them onto the bike, ran the cabling down into the headlamp and back down towards the battery. I could wire them direct to the battery, that is a risk though if I accidentally (or someone else) leaves them running and I come back to a flat battery! Hopefully I should have them wired up by next weekend. Just in time as the weather gets colder.
Posted by smartroad No comments:

1 week in and it seems that the leak fro the valve cover gasket has been stopped. So far I can find no indication of the leak coming back so fingers crossed that is solved. One little thing is to make sure that you have the bike on very level ground before checking your oil level. I thought the road just outside of my house was reasonably level, however I check last time by bringing it into the garage (defiantly level) and it showed that I had a sump full of oil. Outside on the road it was saying I was getting a little low.
Posted by smartroad No comments:

Kawasaki have updated their website pages to account for the new 2009 bikes. The ER-6F has had an overhaul on its pages an I found this video to advertise it. Anyone know where this is, I'd love to ride round there!!

There is also a PDF download for a factheet available too.
Posted by smartroad No comments:

In my last post I mentioned that my mother had brought me a tank pack from Lidl (of all places). I have to admit that I am very surprised at the overall feel and quality of it. For £13 it is has a map pocket; an expandable main compartment (with loads of little pockets for holding things it); three little compartments around the outside, one of which is removable and can be converted into a "bum bag"; and the magnetic base can be removed from the bag and left on the bike, which also has another map pocket if you don't wish to carry the full bag. Carrying wise, it fixes to the bike using magnets (so useless for anyone with an aluminium or plastic/carbon fibre tank) and has two straps to help hold the bag in the unlikely case of the magnets failing, can be held with a handle in the top, over the shoulder or as a backpack.

It has a good weight to it as the fabric seems of a good quality and feels very robust. Overall it is a good buy for what little money it costs.
Posted by smartroad No comments: 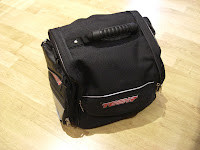 Having used the bike for a couple of weekend jaunts, I was putting the stuff I needed to carry into a backpack then securing it to the pillion seat with a couple of bungy cords. Not the most elegant solution. Last week I got a promotional email from Busters for a reduced price tail pack. It is a Tech7 bag reduced from £39.99 to £14.99. While I was playing with my bike on Saturday, putting in the new gasket, I popped it onto the seat to check the fit. Not too bad. My only comment is the bag itself is HEAVY, coming in at 1.6kg on its own with a max 5kg for anything in it. So it isn't a light thing, but is reasonably big on the inside, with enough room to lay a 6-pint bottle of milk (from Tesco!) in the bottom. Should be enough to carry a weekends worth of clothing. As an aside it will also snugly fit a 5l petrol can if you so desire!

Bless her, my mother also brought me a tank bag from Lidl (I believe). Haven't got that yet from her, but will be interesting to see how it fits onto the bike. My main thing I am looking for with that is to hold my phone in, so that I can see the screen when it is in GPS mode.
Posted by smartroad No comments:

I have had a persistent leak on the no.2 cylinder valve cover. Spent the morning replacing it, surprisingly it went really well. The biggest problem was getting the cover to come off, but a bit of timber and a hammer soon got that off. One thing that I found out about it was that the Haynes Manual suggests that this can be done without removing the engine. Now this is technically true, however it fails to mention that you need to also remove the breather cap to be able to get it out from under the frame. Other then that it was reasonably easy to change.

Now comes the time to see if it really does stop this annoying leak.

Oh and my tickets for the NEC Motorbike show turned up this week, really looking forward to it now!
Posted by smartroad No comments: